On a recent excursion to the Skywalk at Santa Pola, Alicante Province, Spain to shoot some pictures for stock I only used the Sony RX100M3. I'm familiar with the camera and popped off a few shots to upload to my stock portfolio on ALAMY.

It was mid-morning and the light is pretty poor, particularly looking out to sea, so the best shots were to be had in the opposite direction.

The best way to achieve better results was to put the RX100 onto a monopod and use the wifi remote control feature to take some shots from high up to give a better scale to the view, and also to avoid the harsh light a little.
When I used my other Sony camera, the RX10 in conjunction with the Sony Playmemories 'smart remote control' software I didn't have any problems getting the results I wanted, but the setup with the RX100, for me, is not very intuitive.

Anyway, I set it up, and after hoisting it aloft I took a few pics using my phone as a remote control which I was fairly happy with.

On our return, I imported the pictures into Lightroom for editing and captioning and suddenly noticed that the ones from the monopod were missing!
It wasn't a big problem though as I had them on my phone didn't I?

Well, yes I did, but the phone had only saved them at a just over 1600 px on the long side, so, unfortunately, not good enough quality for stock sales, and this type of image is not suitable for upsizing as it would almost definitely fail Alamy QC, which would put me in the doghouse, and so far I haven't had a QC fail with them since my initial submission back in 2013 which was my first of 361 uploads to date.

The pictures below may look pretty, but the quality is only fit for screen viewing. 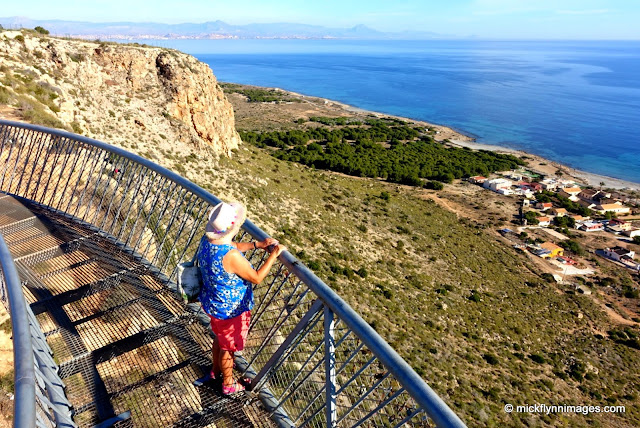 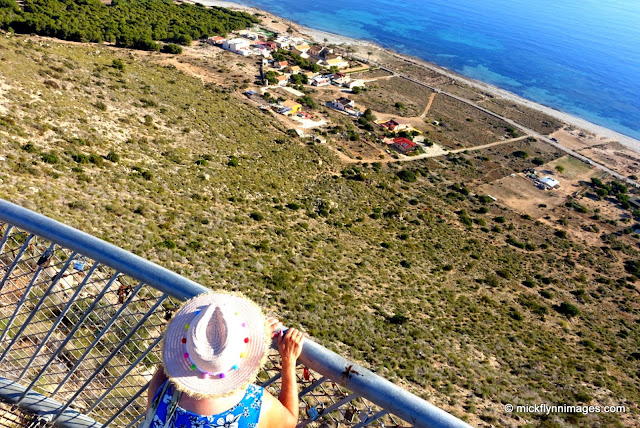 So, when you use the Sony RX100M3 with the apps on the phone, check and test to make sure you will be saving to the phone (I shoot RAW and JPG) and also make sure that the size setting for your phone is on 'original size'.

I never had any problems using the camera/phone software when I had the Sony RX10, but with the RX100M3 I even struggle with setting up my phone to the camera by wifi to use it, although that may change when I go back to Android... I'll let you know.

EDIT: Correct settings for saving full-size JPG to phone and full-size RAW/JPG to camera at the same time.
BEFORE connecting to the camera there is an option of copy image size on the phone version of PlayMemories... I choose original. 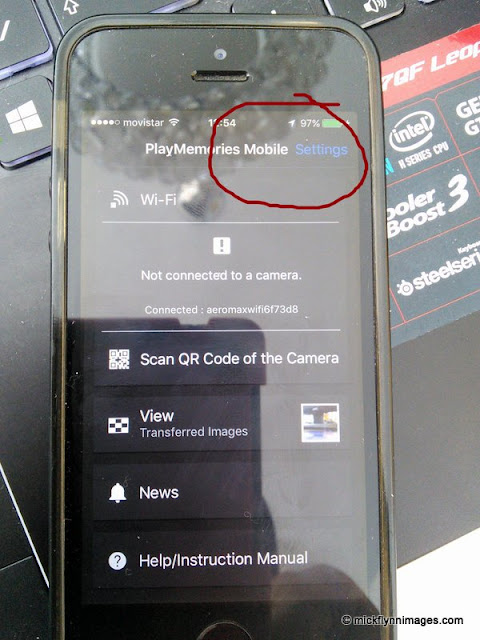 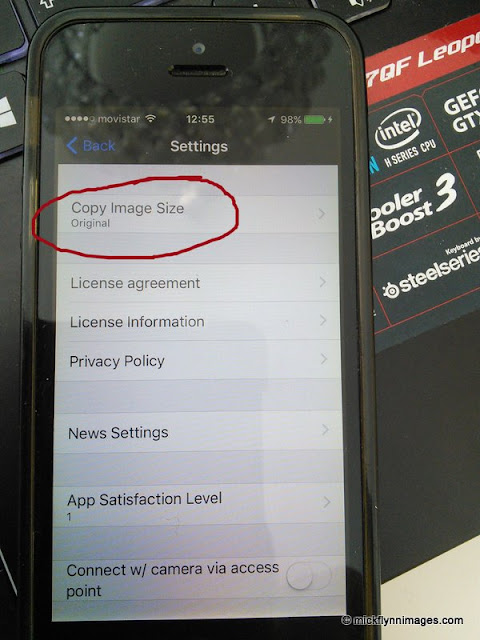 You can then connect to the camera.

After connecting with the camera, the full view of PlayMemories will be showing, then, choosing menu gives you more options including the option of 'size of REVIEW image'.

That is where I was going wrong. 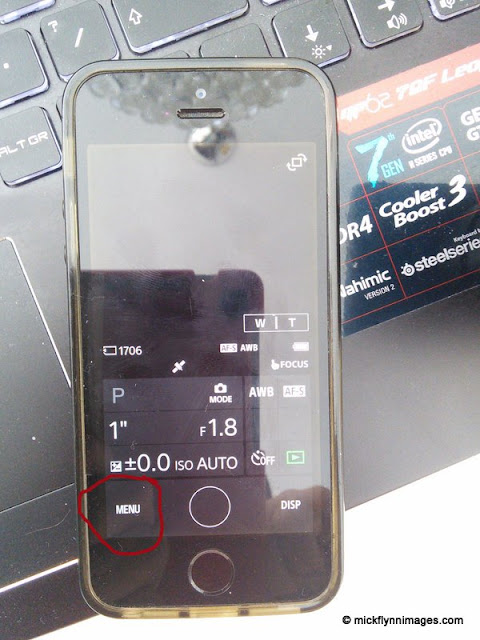 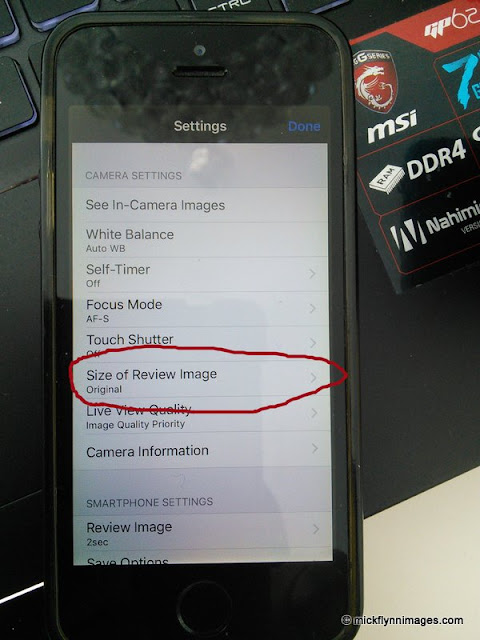 I was assuming that REVIEW meant a preview size on the screen, it doesn't, it means that the file will transfer to the phone at whatever you choose, and I had the menu setting as 2M. 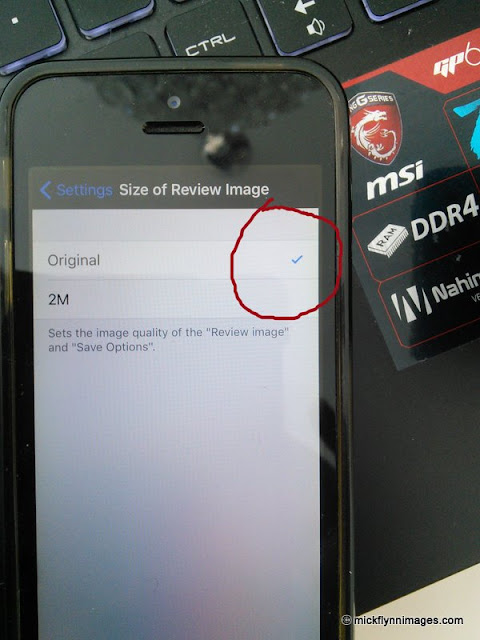 The image now saves on the phone as a JPG at full size and on the camera at my chosen settings which are RAW+JPG.

Edit December 2018, I have now changed back to Samsung and have a Samsung J5.

February 01, 2016
Almost every week there seems to be a post in the Alamy Forum in which a new contributor is struggling to understand the Alamy submission requirements for file size. The website info is quite clear... Q. What file size do I need to upload? A. We need a JPEG file size of over 17MB when uncompressed (this is likely to have a compressed JPEG size of 3-5MB). Opening a JPEG in an image program such as Adobe Photoshop will show you the uncompressed (open) file size. This still doesn't seem to answer the questions which are posted in the forum, so the best solution is to always use this small standalone App from  Braeside Communication Services. As you can see, it shows the compressed size and also the uncompressed size. It will show a warning if the file size falls below the threshold. The two files shown in the image above are fine to upload to Alamy. Download here...  AlamySizeCheck A donation to  David Anderson  would be nice.
Post a Comment
Read more

February 06, 2018
Timelapse of the MSC Kwangyang MSC Kwangyang? Yes, it just happened to pass by on the horizon line at the end as I was shooting another timelapse, this time with my Canon 6d DSLR. I was hoping that the clouds would change into a storm front and become more dramatic, so I chose that particular view with Peacock Island near the horizon line, and, nothing much happened! For this timelapse, I took 940 images in RAW with 5 seconds between each one using a 75-300 EF lens and the Magic Lantern Intervalometer which is loaded on startup from the SD card. It was mid-afternoon so there isn't a problem with big changes in exposure, allowing me to use ISO 100 for quality with an f-stop of 6.3 which is about the sweet spot for this particular lens, and a fast shutter of 1000th of a second as it was on a tall tripod at full zoom in a breeze. These RAW files are imported into Lightroom with my user preset which has a couple of small tweaks to correct the very bad CA and fringing I g
Post a Comment
Read more

October 01, 2019
You've written a fantastic post about your visit to France and just need a couple of pictures to help pad it out and be more interesting, after all, 'a picture is worth a thousand words', so do you just grab one from a Google search? This 800 pixel image of Chateau Chenonceau is big enough for social media and blog posts and is only 176kb so it loads fast for your viewers. Yes you can... but be prepared for the owner to come after you for infringing their copyright after they find it being used without permission on your internet platforms. The best way to obtain pictures to use within your own web content, be that on Facebook, Blogs or any other internet platform (within reason), is to buy a licence which will cover you for the use. I allow my own images to be downloaded for such uses in two sizes on my website here...  mickflynnimages . They are all provided instantly, do not contain a watermark and are ideal to illustrate your stories and articles. News
Post a Comment
Read more